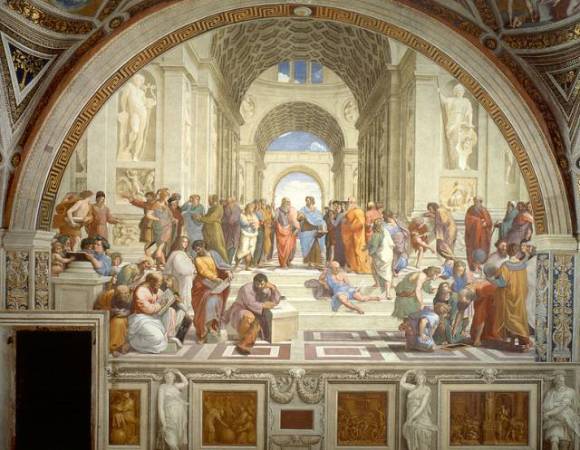 From next week onwards every day a different figure from The School of Postmodernism will be looked at, starting with father of Deconstruction, Jacques Derrida.

However, by way of introduction, here is an extract from an interview with Vittorio Pelosi by Intentist Gideon Parry where Pelosi speaks of the overall concept:

Intentist Gideon Parry:  The work is full of figures, some immediately recognisable, others not. Can you talk through your intentions?

Vittorio Pelosi:                It is influenced by ‘The School of Athens’ by Raphael in the Vatican.  It is a commentary on the subjectivity of postmodernism that can deny objective Truth.

Whereas Raphael’s work showcases the great Greek thinkers of the past, my work represents the most notable postmodernists of our age.

Whereas Raphael’s learned philosophers are encircled, discussing and recording their ideas, mine are gathered around a life model. (As much as possible, the postures of my subjects  are similar to Raphael’s subjects.)

I have chosen the setting of a life drawing session since life drawing has traditionally been seen as the discipline most concerned with objectivity.

The life model is clothed and the postmodernists, conversely, are naked. Apart from being postmodern in this reversal, this also has inferences of The Emperor’s New Clothes about their self-aggrandizement.  The postmodernists are lit from electronic faux candles and the model is in the shadows. The faux candles hint towards Baudrillard’s ideas of simulacra and hyperreality. The lit up figures illustrate the irony that although Roland Barthes, Foucault et al have spoken of the ‘Death of the author’ through their writings they have become household names.

The setting of Raphael’s work is purely inventive with a succession of central arches. The architecture did not exist and structurally cannot be built. The arches are so painted that they fake a greater depth and perspective in the work

My work mirrors that by taking place in the Sainsbury Wing of the National Gallery, designed by postmodern architect Robert Venturi; a site famed for it’s arches. The aligned arches perform the same visual trick as greater depth is achieved by the building of each arch slightly smallerthan the preceding one.

In Raphael’s original are two iconic sculptures of Greek gods, Apollo and Athena. I have replaced these with arguably the ‘gods’ of postmodern popular culture: David Beckham and Madonna. (As the Sainsbury Wing houses pre-Renaissance religious art, and various altar-piece paintings, the two paintings illustrate religious imagery. Beckham is displaying his crucifix tattoo and has long Messiah-like hair. The background is blue and reflects the lapis lazuli of pre-Renaissance art. The frame is actually a large photo-negative frame, as Beckham has become more famous for his image than his football. The negative number is Seven as not only was this his preferred shirt number at Manchester United, but is also the Biblical number of perfection. Madonna is painted in the style of Munch’s ‘Madonna.’ and her frame is a television frame. The painting is signed MTV, since this ‘author’ has been one of the reasons of her stardom.

Intentist Gideon Parry: One obvious thing is that the frame appears to be the wooden stretchers of the canvas. Am I right?

Vittorio Pelosi:  Yes. Well noticed! In a final postmodern  twist the work is painted on a canvas that is in the dimensions of the golden ratio 1:1.61..(something that fascinated Greek thinker Pythagoras) but is painted on the underside of the stretched canvas, so that the stretchers are coated in gold leaf and become the frame.

Intentism is an international art movement that includes artists, writers, actors, musicians and philosophers. We all share the belief that the meaning of the work is the outworking of intention. We further maintain that in rejecting authorship and intention much creative work has become anemic and indifferent. Consequently, our work celebrates intention by leaving a creative trail of the editorial process behind in the finished piece.