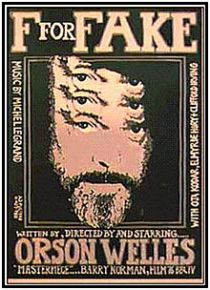 . It focusses on the notorious art forger Elmyr de Hory and Elmyr’s biographer, Clifford Irving, who also wrote the celebrated fraudulent Howard Hughes autobiography, then touches on the reclusive Hughes and Welles’ own career (which started with a faked resume and a phony Martian invasion).  Although it wasn’t well received on its initial release it is now thought of as a classic. Along the way it explores Intentist ideas of authorship, meaning and identity.

Intentism is an international art movement that includes artists, writers, actors, musicians and philosophers. We all share the belief that the meaning of the work is the outworking of intention. We further maintain that in rejecting authorship and intention much creative work has become anemic and indifferent. Consequently, our work celebrates intention by leaving a creative trail of the editorial process behind in the finished piece.